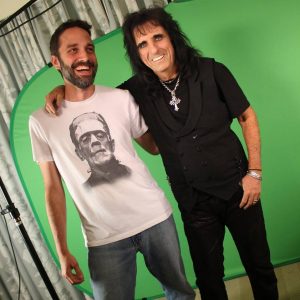 Justin Beahm is a producer, director, and writer. His Reverend Entertainment produces content for Shout! Factory, Scream Factory,  Paramount Pictures, Anchor Bay, Music Box Films, Vinegar Syndrome, and other studios and distribution companies. Beahm has spearheaded theatrical releases in partnership with companies such as Screenvision and Trancas International Films, and his documentary YOU CAN’T KILL THE BOGEYMAN ran nationally and internationally with the 2012 re-release of John Carpenter’s HALLOWEEN. He is a feature writer for horror cinema publications Fangoria, Famous Monsters of Filmland, Delirium, Horrorhound, and Scream, as well as for specialty imprint Fantasm Media. He has hosted film festivals all over the United States, including his own indie horror screening series at the world famous TCL Chinese Theatre in Los Angeles. Justin has spoken at a number of schools, appears on numerous commentary tracks, and hosts The Justin Beahm Radio Hour podcast. He splits his time between his home in Iowa and California.